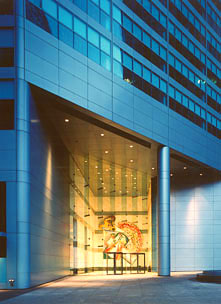 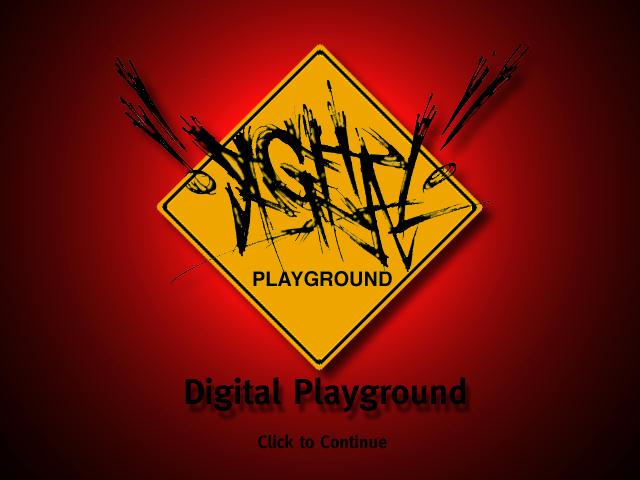 DIGITAL PLAYGROUND is a large project which incorporated and repurposed final class and independent student projects from several Community Arts Partnership (CAP) sites across the greater Los Angeles area. CAP, an organization run from the California Institute of the Arts, offers free arts training for “at-risk” Junior High through Adult students across LA. CalArts students are Teaching Assistants – sometimes full teachers – for the classes. This project trained students in web development, ISDN video teleconferencing, and digital graphic arts. Students from these diverse communities interacted with each other; first via ISDN, and eventually in person. Although these communities were only 20 miles apart, the students would probably never have set foot in each other’s neighborhoods. The project included work from Plaza de la Raza in East Los Angeles; Inner City Arts in downtown Los Angeles; Watts Towers Arts Center in Watts; and KAOS Multimedia Center in Leimert Park.

The theme and working title for the project was “Passion, Pasion, Passion” and it targeted views of passion in Latino and African American communities. It was an outgrowth of the previous year’s projects, which examined participant’s literal and figurative “families” – from parents and siblings to gangs and co-workers.

Digital Playground was developed throughout 1997-98, and showcased class projects on a CD-ROM-based “website.” Streaming media development tools were not yet widely or inexpensively available; however, without bandwidth constraints, we could include complete, digitally formatted video projects on the CD-ROM. HTML / Javascript pages provided an interface to these videos, and were utilized as a medium for the students to respond to the subject matter they researched in their classes.

Project Duties:
I began my role in the project as a digital graphics and video teleconferencing instructor, however in the summer I was promoted to project manager. At this point a broad schematic existed for the project; however most of the portions were incomplete, with no plan existing for coordinating the completion of the various elements. I consequently organized the contributions of all the different classes into the project. I worked with student artists, writers, film makers, teachers, and musicians to integrate all of their work into the final CD-ROM. In this role I had to coordinate submission deadlines, learn and write javascript code, audio engineer mix-down sessions on Pro-Tools from the recording studio, digitize videos on the Media 100 system and Video Toaster, complete unfinished graphic design projects, and help train others in use of the broad range of technology utilized in the project. Over the busy course of the summer of 1998, I brought the project to near-conclusion; and several fully-functional CD-ROMs were created. In the fall I returned to work on my thesis at CalArts, and political discussions among the involved organizations led to subsequent editing of the final CD-ROM and the censorship of one of the videos. Two other instructors made these final changes for the CD-ROM.

Tasks Performed:
Team planning, organization, and coordination
Design and Preparation of T-Shirt artwork
Production of a promotional Postcard
Adapted student artwork for use on the pages
Audio Engineering of Ed Bland and Chu’s Project
Digitized nearly all video clips on the CD-ROM
Designed and created an interface for written material introducing the videos; learned javascript to create it and teach others how to use it.
Javascript code for roll-over functionality and pop-up video windows
Created original artwork for some of the pages (Leimert Park Pyramid, On Spirituality, KAOS Video Projects)
Completed Artwork by others (Digital Playground Projects, Digital Playground, Map Graphics)
Helped execute animated graphics in Dreamweaver (People to People)
Burned first functional CD-ROM of the project
Helped demo the in-progress project on an in-house network via multiple workstations
HTML programming training
Navigation Revisions